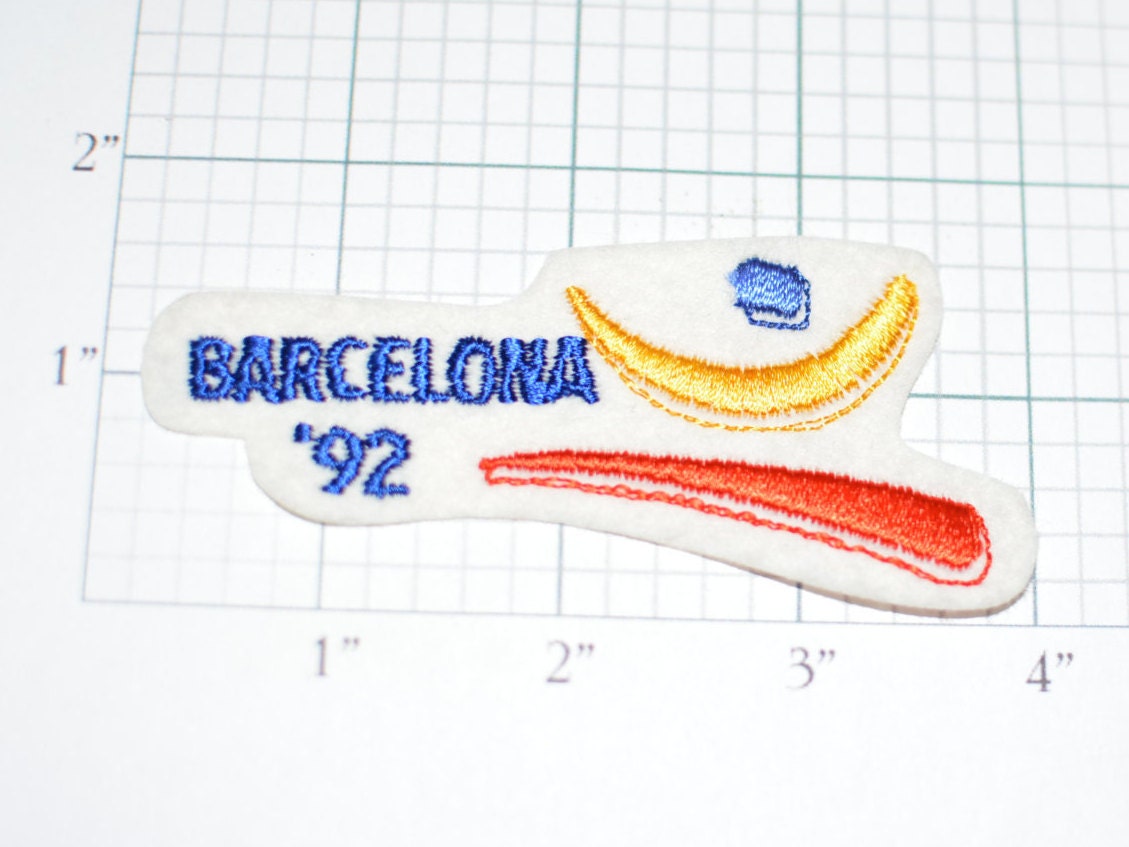 This beautiful patch is a great addition for any collector's stock. I have a very limited number of this very popular patch remaining in inventory. So be sure to grab yours right now!

Event Information:
The 1992 Summer Games in Barcelona, Spain were the last Summer games to be held in the same year as the Winter Olympics. Since that time the Winter and Summer games have alternated every 2 years.The "Unified" team of the former Soviet Republic were the overall medal winners with 45 Gold and 112 overall. USA was second with 37 Gold and 108 overall.

Other highlights of the Summer games:

- At the Opening Ceremony, Greek mezzo-soprano, Agnes Baltsa sang "Romiossini" while the Olympic flag was being walked around the entire stadium before being hoisted to the singing of the Olympic Hymn by Alfredo Kraus in Catalan and Spanish.

- The Olympic flame cauldron was apparently lit by the Paralympic archer Antonio Rebollo, who shot a flaming arrow lit by the last torch runner into it. Rebollo overshot the cauldron (some sources claim it was done for the safety of the spectators,) and his arrow did not light the natural gas rising from the cauldron. It was ignited via remote control by a technician, Reyes Abades, who did all the rehearsals and the ceremony itself, as he explained in an interview with his local newspaper 'globalhenares.com', "...he created the mechanism for lighting the Olympic flame".

- South Africa was allowed to compete in the Olympics for the first time since the 1960 Games, after a long suspension for its apartheid policy. White South African runner Elana Meyer and black Ethiopian runner Derartu Tulu fought a close race in the 10,000 m (won by Tulu) and then ran a victory lap hand in hand.

- Following its reunification in 1990, Germany sent a single, unified Olympic team for the first time since the 1964 Games.

- As the Soviet Union had been dissolved in 1991, the Baltic nations of Estonia, Latvia and Lithuania sent their own teams for the first time since 1936. The other Soviet republics competed under the name "Unified Team".

- The break-up of SFR Yugoslavia led to the Olympic debuts of Croatia, Slovenia and Bosnia and Herzegovina. Due to United Nations sanctions, FR Yugoslavian athletes were not allowed to participate with their own team. However, individual athletes could compete under the Olympic flag as Independent Olympic Participants.

- In the diving competitions, held in the view of the Sagrada Família, Chinese Fu Mingxia won the high dive event at the age of 13, becoming the youngest gold medalist at the Olympics of all time .

- In men's artistic gymnastics, Vitaly Scherbo from Belarus, representing the Unified Team, won six gold medals, including four on a single day. Five of the six golds were in individual events, tying Eric Heiden's record for individual gold medals at a single Olympics (Michael Phelps would break this record in 2008).

- Evelyn Ashford won her fourth Olympic gold medal in the 4x100 metre relay, making her one of only four female athletes to have achieved this in history.

- In women's 200 metres breaststroke, Kyoko Iwasaki of Japan won a gold medal at age of 14 years and 6 days, became the youngest-ever gold medalist in swimming competitions at the Olympics.

- Badminton and women's judo became part of the Olympic programme, while slalom canoeing returned to the Games after a 20-year absence.

- Several of the U.S. men's volleyball gold medal team from the 1988 Olympics returned to vie for another medal. In the first round, they lost a controversial match to Japan, sparking them to shave their heads in protest (including Steve Timmons, sacrificing his trademark red flattop for the protest).

- Derek Redmond of Great Britain tore a hamstring during a 400m semi-final heat. As he struggled to finish the race, his father entered the track without credentials and helped him complete the race, to a standing ovation from the crowd.

- Gail Devers won the 100 meter dash in one of the closest races in history. 5 women finished within 0.06 seconds of each other.

- In basketball, the admittance of professional players led to the formation of the "Dream Team" of the United States, featuring Michael Jordan, Magic Johnson, Larry Bird and other NBA stars. The Dream Team, which easily won the gold medal, would be inducted as a unit into the Basketball Hall of Fame in 2010.

- Two gold medals were awarded in solo synchronized swimming, after a scoring error in which a judge inadvertently entered an 8.7 instead of the intended 9.7 in the computerized scoring system for one of Sylvie Fréchette's figures. An immediate protest to FINA was unsuccessful. The error ultimately placed Fréchette second, unable to catch Kristen Babb-Sprague for the gold medal. In December 1993, however, FINA awarded Fréchette a gold medal, replacing her silver medal and leaving the two swimmers both with gold.

This beautiful patch is a great addition for any collector's stock. I have a very limited number of this very popular patch remaining in inventory. So be sure to grab yours right now!

Most domestic (USA) orders arrive in 5-6 business days or less. However, that can be very erratic depending on seasonal and weather factors affecting the postal service. Occasionally it may take up to 2 weeks to receive your order.

Priority mail upgraded shipping options are available for select listings if you need faster delivery. However, please understand that once we ship your order it is out of our hands and we can't control whether the USPS actually delivers it in a timely manner. Please consult their website for their estimated delivery times to your area. We ship from zip code 64119.

Any customs charges, duties, taxes or other charges related to importation of goods into your country are the responsibility of the buyer. We're not experts on International shipping laws, and we also don't collect any such monies on behalf of foreign countries, so it's up to you to know and understand any tariffs, taxes or other import charges you may face once the merchandise arrives.